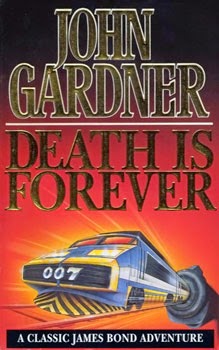 Death Is Forever was the twelfth novel by John Gardner featuring Ian Fleming's secret agent, James Bond (including Gardner's novelization of Licence to Kill). Death Is Forever is significant as the first James Bond novel to be published after the collapse of the Soviet Union and the end of the Cold War, two elements that were part and parcel of Bond's creation 40 years earlier.

The aftermath of the Cold War provides the setting for the plot of Death Is Forever. After the deaths of a British Intelligence agent and an American agent with the CIA working in Germany under mysterious and surprisingly old-fashioned circumstances, James Bond and CIA agent Elizabeth Zara ("Easy") St. John are assigned to track down the surviving members of "Cabal", a Cold War-era intelligence network that received a mysterious and unauthorized signal to disband. Soon, Bond finds himself playing a life-or-death game of "Who do You Trust?" as he and Easy track down Wolfgang Weisen, the power responsible for killing off Cabal's members one by one. Bond uncovers Weisen's plot to kill off the heads of each European country during the inaugural run of the Eurostar from London to Paris in an effort to create havoc in the west and usher in a second era of Communism.

More than most other Gardner novels, Death Is Forever is grounded in current events, with the fallout from the end of the Cold War and the failed 1991 Russian coup being important backdrops to the story. The Eurotunnel connecting England and France, which was still under construction at the time the book was written, also serves as a major setting.