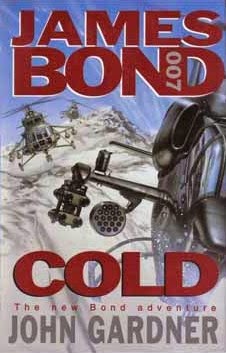 COLD  was the sixteenth and final novel by John Gardner featuring Ian Fleming's secret agent, James Bond (including Gardner's novelizations of Licence to Kill and GoldenEye). In the United States, the book was retitled Cold Fall. This was the first time an original Bond novel had been given a different title for American book publication, other than for reasons of spelling, since Fleming's Moonraker was initially published there under the title Too Hot to Handle in the mid-1950s. The British title is properly spelled as an acronym (with no full stops), but it is also common to find it spelled Cold.

The novel is split into two books, one called "Cold Front" and the second entitled "Cold Conspiracy". The time between each book appears to be the time period allotted to Gardner's previous Bond outings, Never Send Flowers and SeaFire. The story opens with the crash of a Boeing 747-400 at Dulles International Airport in Fairfax and Loudoun counties, Virginia, near Washington, D.C., and the apparent death of Bond's friend and lover, the Principessa Sukie Tempesta. Bond is then sent by M to the airport with an investigation team which leads to meetings with FBI agent Eddie Rhabb.

The main action takes place in Italy at the home of the Tempesta brothers, Luigi and Angelo, where Bond gets caught in the act with one of the brothers' wives. As James later explains to M, the lady made the advances. The enemy of the story is provided by a terrorist army called COLD, which stands for Children Of the Last Days.