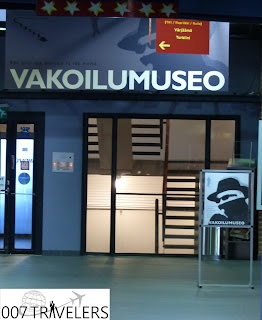 What: Spy Museum - The first espionage museum in the world, established 1998.

007 Travelers visited Spy Museum located in Finlayson area in Tampere and met right away Mr. Tommi Eskola at the reception. Soon after that we met Mr. Teppo Turja, the founder of Spy Museum. He was there just for us. He told that he has established Spy Museum 1998 so it will be 18 years old on May 2016. The conservation of unusual and unique objects for future generations is one of the basic functions of the museum.

We were taken to a private tour and Teppo Turja told us interesting facts about the museum and its espionage devices. We learned as well about some agents who are the real life´s james bonds and counterespionage persons. 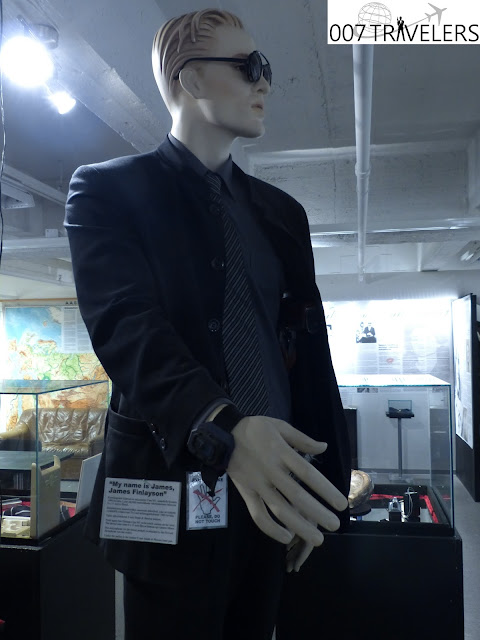 We entered the eavesdropping area where we noticed a photo of Sidney Reilly, and Mr. Turja said that Reilly is listed as an inspiration for James Bond.

Also according to Wikipedia "In Ian Fleming, The Man Behind James Bond by Andrew Lycett, Sidney Reilly is listed as an inspiration for James Bond. Reilly's friend, former diplomat and journalist Sir Robert Bruce Lockhart, was a close acquaintance of Ian Fleming for many years and recounted to Fleming many of Reilly's espionage adventures. Lockhart had worked with Reilly in Russia in 1918, where they became embroiled in an SIS-backed plot to overthrow Lenin's Bolshevik government. Within five years of his disappearance in Soviet Russia in 1925, the press had turned Reilly into a household name, lauding him as a master spy and recounting his many espionage adventures. Fleming had therefore long been aware of Reilly's mythical reputation and had listened to Lockhart's recollections. Like Fleming's fictional creation, Reilly was multi-lingual, fascinated by the Far East, fond of fine living, and a compulsive gambler."

Counterespionage persons for Bond in real life represent surely Stig Bergling, Oleg Gordievsky and Arne Treholt, not to mention Richard Sorge who was triple agent, reporter and Doctor of Philosophy. "Sorge was a tough guy but his weakness for beautiful women finally exposed him", Mr.Turja told us.


We were thrilled to hear about the women agents and we saw a golden ring which was once filled with poison. The ring is from 1910's and came to Spy Museum from Germany. There is an engraving on that ring,"MZ". Would it possible stand for Margaretha Geertruida Zelle alias Mata Hari? Mata Hari means "Sun" in Indonesian language.

Margaretha Geertruida Zelle performed as oriental dancer Mata Hari at the beginning of 1900's. She spent luxury life with eminent men and provided secret military information for money during the First World War. The varietee dancer and double agent Mata Hari was convicted of spying for Germany and executed by shooting at the age of 41 on 15th of October 1917.

With twinkle in our eyes 007 Travelers remembers that it is said in James Bond parody "Casino Royale" (1967) that James Bond has a daughter with Mata Hari called Mata Bond. The role of Mata Bond was played by Joanna Pettet. 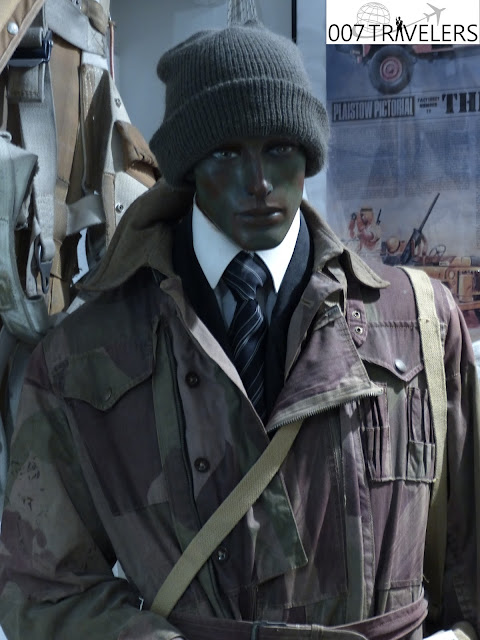 "Espionage is a remarkable phenomenom that has affected world´s history", says Mr. Turja. Spying affects in all aspects of society life also today .Nowadays the most important shape of spying is Network espionage.
Spy Museum has the equipment for visitors to legally test how easy it is to capture an e-mail. An object not larger than a regular memory stick hidden into your computer recorded everything you typed on your keyboard. Today the object is obsolete and the actual spy gadget is hidden in your software.

Teppo Turja could not reveal the origin of most of the things in the museum because the equipment have been given to museum in the terms that the origin remains untold. That much he told that Spy Museum has received some espionage devices from Finnish Defence Forces.

Mr. Turja tells that war time Enigma and following items items are wanted for the collection of Spy Museum:


Secret messages is written on the scalp. In order to hide the secret messages, people let their hair grow and messages were revealed by shaving the hair off. 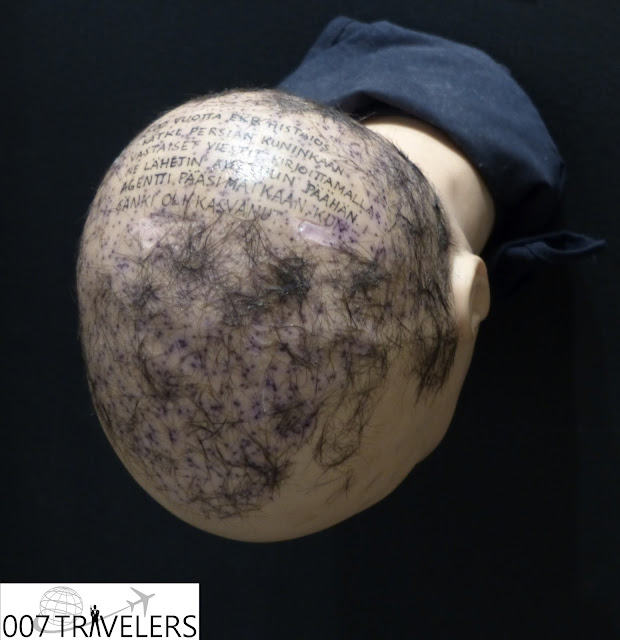 Minox - the world's most legendary spy camera
Minox's first Riga -model was manufactured in Latvia in 1938. Minox quickly became very popular amongst espionage and intelligence organizations. Because of its small size and high quality it became an instant hit among spies.

The test measures the candidates abilities in the field of espionage with eight different tasks including, code breaking, attack prevention with a laser weapon and finding a cache with a metal detector. Each candidate will receive a diploma that recommends them into an organization best suited for their ability.

007 Travelers passed the Agent test, scored 33 points and got a Diploma!
Spy Museum recommends 007 Travelers to Israel's intelligent service Mossad. How good are you? Go and test yourself.

Reserve 30-45 minutes to fulfill the test. Cost of the test is  5e/person + admission. 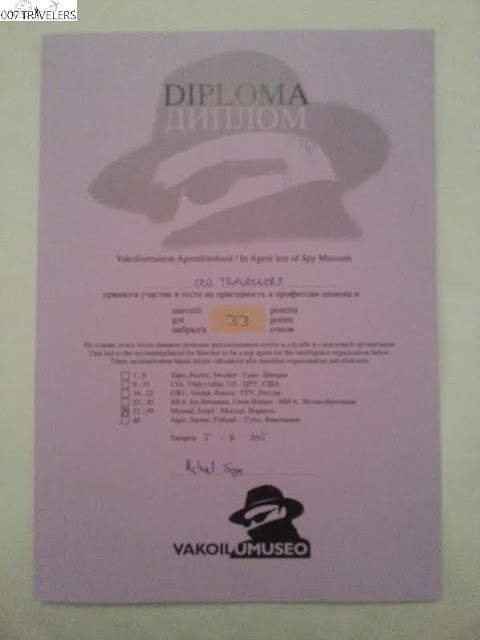 Surely you want to buy a pen with an invisible ink or other agent stuff? 007 Travelers did, of course! 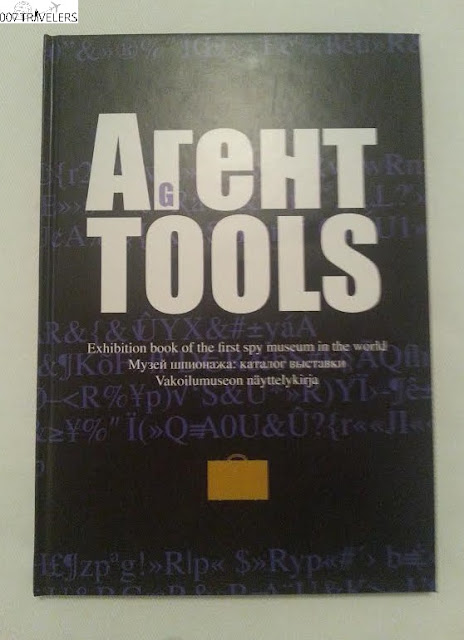 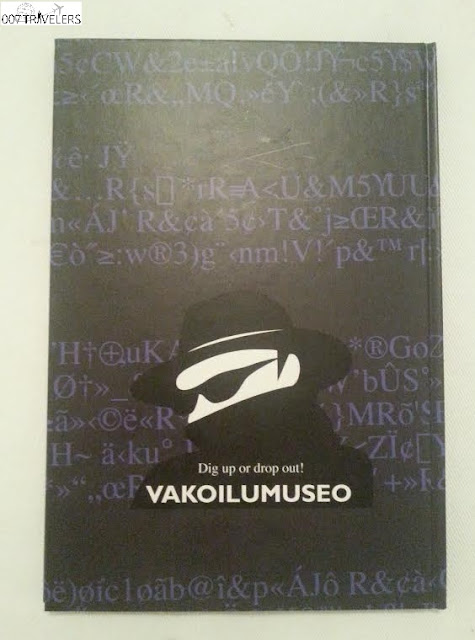 One of the museum's educational goals is to make children and youths interested in museums in general.

Half of the Spy Museum´s visitors are foreign tourists and the other half is from Finland. The most memorable visitors according to Teppo Turja were Whitesnake bands members, who showed up suddenly to the Spy Museum! There have also visited people who are claimed to appear on the secret so called Tiitinen´s list, suspected of Stasi connections. At its best Spy Museum has over 20 000 visitors per year. You should visit too! 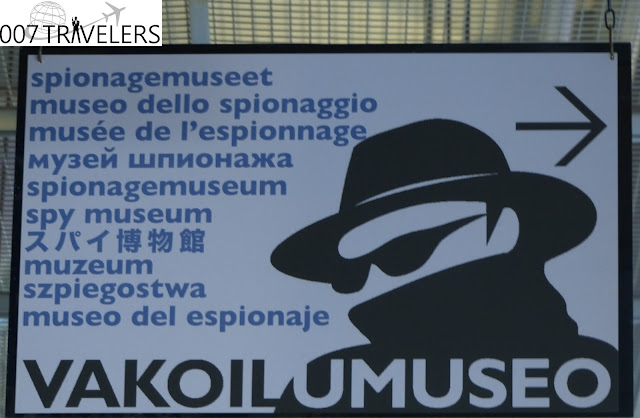 At the moment Teppo Turja has been on retirement for one year, and now his son Pirkka Turja leads Spy Museum. Spy Museum is a partner for 007 Travelers on THUNDERBALL 50 YEARS ANNIVERSARY SCREENING event on 15th of August 2015. See more information about the event here.


We recommend visiting Spy Museum in Tampere and accommodation in Solo Sokos Hotel Tampere, which was a choice of 007 Travelers.

Hotel opened in the autumn of 2014 and it is an awesome landmark in center of Tampere, right next to railway station. The hotel has 25 floors. The hotel was granted the Good Construction Award 2014. The award jury described the hotel as one of the most significant buildings in the townscape of Tampere in the history of the city. 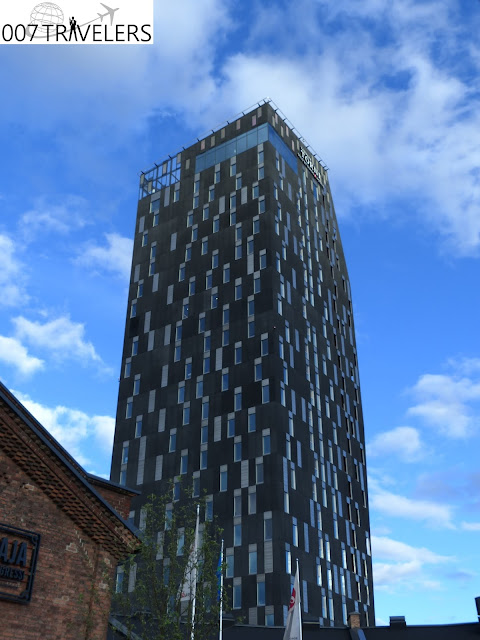 Helpful staff in the lobby welcomed us and they told that we can buy tickets to amusement park Särkänniemi from the lobby. This was very handy! Reception personnel was quick and helpful when our child needed a plaster. We appreciate also quick reception services. Everything went smoothly, even when there were lots of people. 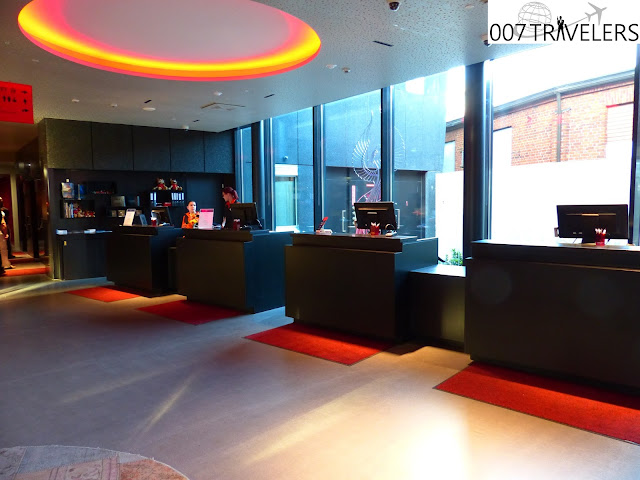 Our room was on the 12th floor and we moved there by using an elevator with a view. We found our double room with extra bed. Room decoration and view from the window was very lovely. 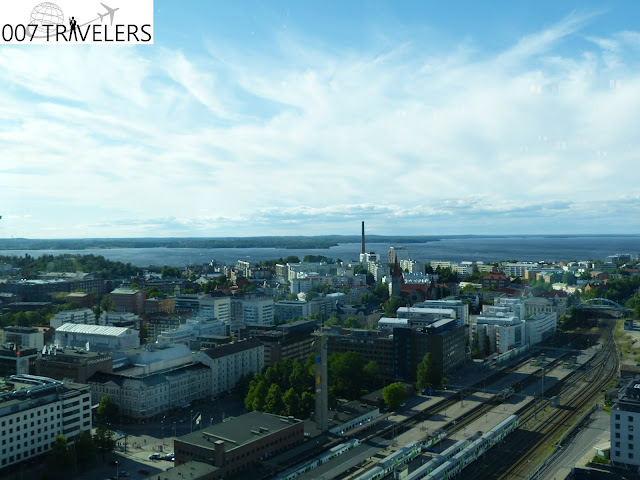 There was Paja Bar's Tampere rock style menu in the room. We visited the bar which is decorated with guitars and clothes of rock icons of Tampere area, Finland. Next to Paja Bar is restaurant Grill it!, The restaurant décor contains elements from the original engine bay. 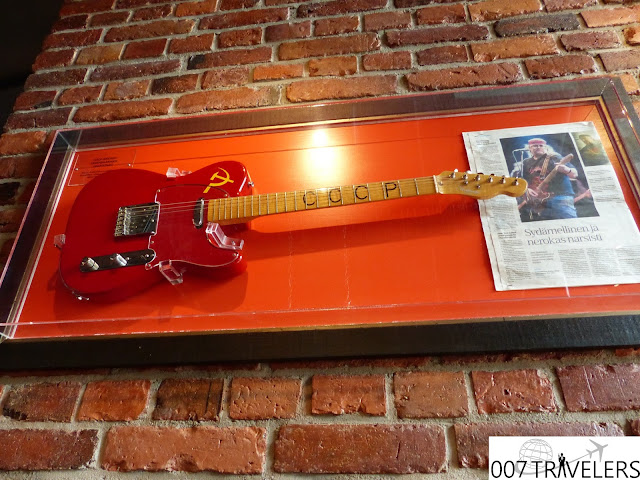 Solo Sokos Hotel Torni is a child friendly choice, there is children's playroom in downstairs. Playroom includes bouncy castle and other nice activities for children. 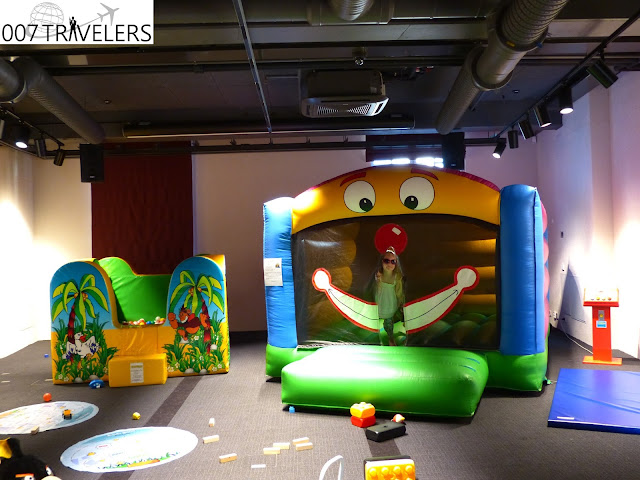 In the evening, we felt secured, due to guards in the lobby guiding customers to the elevators. We went up to 25th floor, where is Moro Sky Bar, which has 100 seats indoors and 150 seats on the terrace .The bar is stylishly decorated in a sporty spirit, including a fascinating Wall of Heroes paying a tribute to Tampere-based athletes who have achieved success in Olympic games. 007 Travelers enjoyed the spectacular view! This hotel is a great experience! 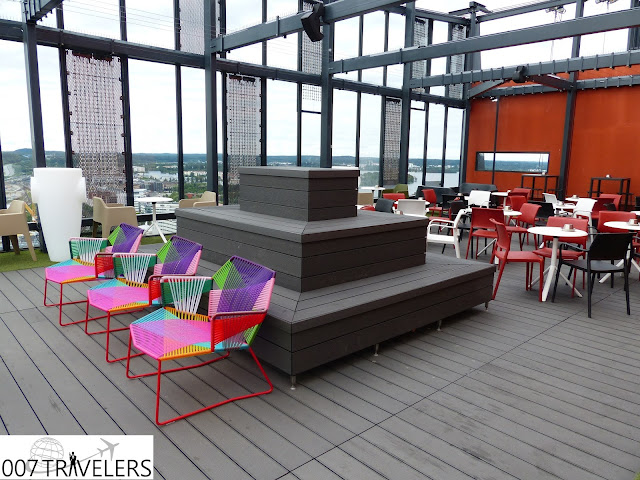 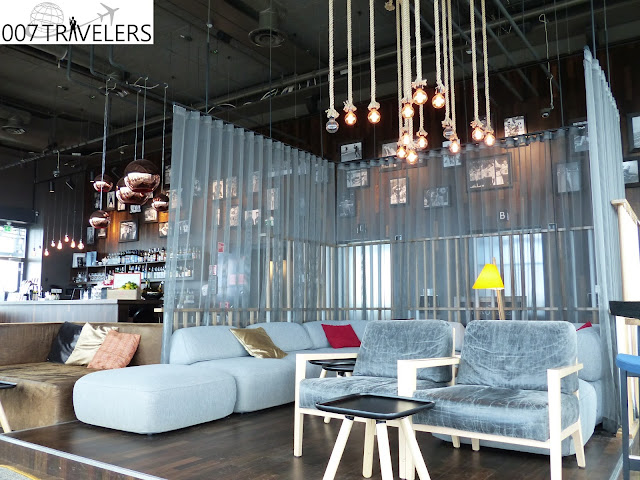