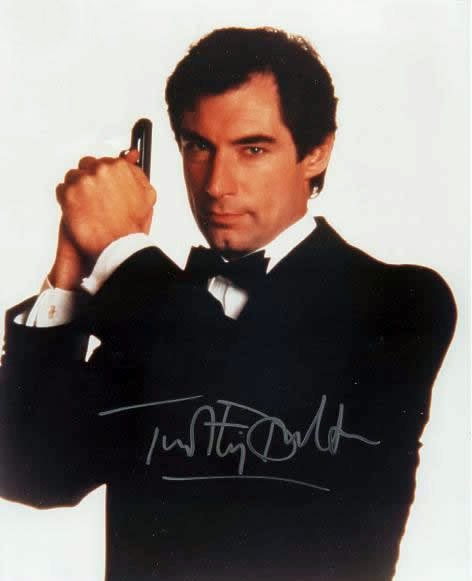 Timothy Peter Dalton is a British actor of film and television. Dalton is known for portraying James Bond in The Living Daylights (1987) and Licence to Kill (1989), as well as Rhett Butler in the television miniseries Scarlett (1994), an original sequel to Gone with the Wind.

James Bond: 1987-1994
Dalton had been considered for the role of James Bond several times. According to the documentary Inside The Living Daylights, the producers first approached Dalton in 1968 for On Her Majesty's Secret Service although Dalton himself in this same documentary claims the approach occurred when he was either 24 or 25 and had already done the film Mary, Queen of Scots (1971). Dalton told the producers that he was too young for the role. In a 1987 interview, Dalton said, "Originally I did not want to take over from Sean Connery. He was far too good, he was wonderful. I was about 24 or 25, which is too young. But when you've seen Bond from the beginning, you don't take over from Sean Connery." In either 1979 or 1980, he was approached again, but did not favour the direction the films were taking, nor did he think the producers were seriously looking for a new 007. As he explained, his idea of Bond was different. In a 1979 episode of the television series Charlie's Angels, Dalton played the role of Damien Roth, a millionaire playboy described by David Doyle's character as "almost James Bond-ian".

In 1986, Dalton was approached to play Bond after Roger Moore had retired, and Pierce Brosnan could not get out of contractual commitments to the television series Remington Steele. However, Dalton would soon begin filming Brenda Starr and could do The Living Daylights only if the Bond producers waited six weeks.

Dalton's first appearance as 007, The Living Daylights (1987) was critically successful, and grossed more than the previous two Bond films with Moore, as well as contemporary box-office rivals such as Die Hard and Lethal Weapon. However, his second film, Licence to Kill (1989), although almost as successful as its predecessor in most markets, did not perform as well at the U.S. box office, in large part due to a lacklustre marketing campaign, after the title of the film was abruptly changed from Licence Revoked. The main factor for the lack of success in the U.S. was that it was released at the same time as the hugely successful Indiana Jones and the Last Crusade, Tim Burton's Batman, and Lethal Weapon 2, during the summer blockbuster season. In the United Kingdom - one of its critical markets, the film was also hampered by receiving a 15 certificate from the British Board of Film Classification which severely affected its commercial success. Future Bond films, following the resolution of legal and other issues, were all released between 31 October and mid-December, in order to avoid the risk of a summer failure, as had happened to Licence To Kill.

Since Dalton was contracted for three Bond films, the pre-production of his third film began in 1990, in order to be released in 1991. What was confirmed is that the story would deal with the destruction of a chemical weapons laboratory in Scotland, and the events would take place in London, Tokyo and Hong Kong. However, the film was cancelled due to legal issues between UA/MGM and Eon Productions, which lasted for four years.

The legal battle ended in 1993, and Dalton was expected to return as James Bond in the next Bond film, which later became GoldenEye. Despite his contract having expired, negotiations with him to renew it took place. In an interview with the Daily Mail in August 1993, Dalton indicated that Michael France was writing the screenplay for the new film, and the production was to begin in January or February 1994. When the deadline was not met, Dalton surprised everyone on 12 April 1994 with the announcement that he would not return as James Bond. At this time, he was shooting the mini-series Scarlett. The announcement for the new Bond came two months later, with Pierce Brosnan playing the role. Dalton reflected in 2007, "I was supposed to make one more but it was cancelled because MGM and the film's producers got into a lawsuit which lasted for five years. After that, I didn't want to do it any more."