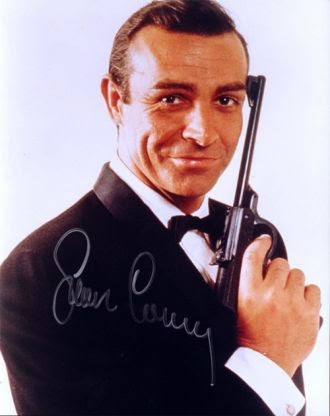 Sir Thomas Sean Connery Kt. (/ˈʃɔːn ˈkɒnəri/; 25 August 1930) is a Scottish actor and producer who has won an Academy Award, two BAFTA Awards (one of them being a BAFTA Academy Fellowship Award) and three Golden Globes (including the Cecil B. DeMille Award and a Henrietta Award). He was knighted by Elizabeth II in July 2000, and received the Kennedy Center Honors in the US.

Connery is best known for portraying the character James Bond, starring in seven Bond films between 1962 and 1983 (six Eon Productions films and the non-Eon Thunderball remake, Never Say Never Again). In 1988, Connery won the Academy Award for Best Supporting Actor for his role in The Untouchables. His film career also includes such films as Marnie, The Name of the Rose, The League of Extraordinary Gentlemen, Indiana Jones and the Last Crusade, The Hunt for Red October, Highlander, Murder on the Orient Express, Dragonheart, and The Rock.

James Bond: 1962–71, 1983
Connery's breakthrough came in the role of secret agent James Bond. He was reluctant to commit to a film series, but understood that if the films succeeded his career would greatly benefit. He played the character in the first five Bond films: Dr. No (1962), From Russia with Love (1963), Goldfinger (1964), Thunderball (1965), and You Only Live Twice (1967) – then appeared again as Bond in Diamonds Are Forever (1971) and Never Say Never Again (1983). All seven films were commercially successful. James Bond, as portrayed by Connery, was selected as the third-greatest hero in cinema history by the American Film Institute.
Connery's selection as James Bond owed a lot to Dana Broccoli, wife of Cubby Broccoli, who is reputed to have been instrumental in persuading Cubby that Sean Connery was the right man. James Bond's creator, Ian Fleming, originally doubted Connery's casting, saying, "He's not what I envisioned of James Bond looks" and "I'm looking for Commander Bond and not an overgrown stunt-man," adding that Connery (muscular, 6' 2", and a Scot) was unrefined. Fleming's girlfriend told him Connery had the requisite sexual charisma. Fleming changed his mind after the successful Dr. No première; he was so impressed, he created a half-Scottish, half-Swiss heritage for Bond in the later novels.
Connery's portrayal of Bond owes much to stylistic tutelage from director Terence Young, polishing the actor while using his physical grace and presence for the action. Lois Maxwell, who played Miss Moneypenny, related that, "Terence took Sean under his wing. He took him to dinner, showed him how to walk, how to talk, even how to eat." The tutoring was successful; Connery received thousands of fan letters a week, and the actor became one of the great male sex symbols of film.
During the filming of Thunderball in 1965, Connery's life was in danger in the sequence with the sharks in Emilio Largo's pool, which he had been in fear of when he read the script. He insisted that Ken Adam build a special Plexiglas partition inside the pool, but, despite this, it was not a fixed structure and one of the sharks managed to pass through it. Connery had to abandon the pool immediately, seconds away from attack.
Connery was forced to wear a toupee during each of the Bond movies because he had started balding at the age of 21.
In 2005, From Russia with Love was adapted by Electronic Arts into a video game, titled James Bond 007: From Russia with Love, which featured all-new voice work by Connery as well as his likeness, and those of several of the film's supporting cast.

Email ThisBlogThis!Share to TwitterShare to FacebookShare to Pinterest
Labels: Diamonds Are Forever, Dr. No, From Russia with Love, Goldfinger, Never Say Never Again, Sean Connery, Thunderball, You Only Live Twice