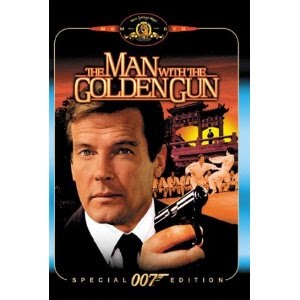 The Man with the Golden Gun was the fourth and final film in the series directed by Guy Hamilton. The script was written by Richard Maibaum and Tom Mankiewicz. The film was set in the face of the 1973 energy crisis, a dominant theme in the script—Britain had still not yet fully overcome the crisis when the film was released in December 1974. The film also reflects the then-popular martial arts film craze, with several kung-fu scenes and a predominantly Asian location, being shot in Thailand, Hong Kong, and Macau.

Email ThisBlogThis!Share to TwitterShare to FacebookShare to Pinterest
Labels: Roger Moore, The Man with the Golden Gun