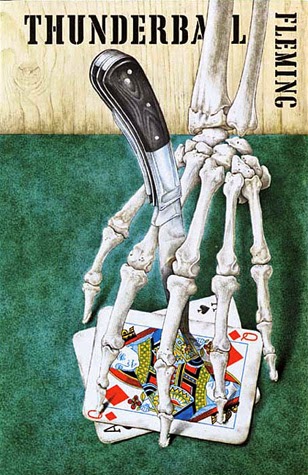 Thunderball is the ninth book in Ian Fleming's James Bond series, and the eighth full length James Bond novel. It was first published in the UK by Jonathan Cape on 27 March 1961, where the initial print run of 50,938 copies quickly sold out. The first novelization of an unfilmed James Bond screenplay, it was born from a collaboration by five people: Ian Fleming, Kevin McClory, Jack Whittingham, Ivar Bryce and Ernest Cuneo, although the controversial shared credit of Fleming, McClory and Whittingham was the result of a courtroom decision.

The story centres on the theft of two atomic bombs by the crime syndicate SPECTRE and the subsequent attempted blackmail of the Western powers for their return. James Bond, Secret Service operative 007, travels to the Bahamas to work with his friend Felix Leiter, seconded back into the CIA for the investigation. Thunderball also introduces SPECTRE's leader Ernst Stavro Blofeld, in the first of three appearances in Bond novels, with On Her Majesty's Secret Service and You Only Live Twice being the others.