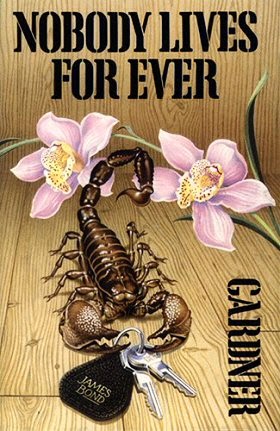 Nobody Lives for Ever (published in American editions as Nobody Lives Forever) was the fifth novel by John Gardner featuring Ian Fleming's secret agent, James Bond.

En route to retrieve his faithful housekeeper, May, from a European health clinic where she is recovering from an illness, Bond is warned by the British Secret Service that Tamil Rahani, the current leader of SPECTRE, now dying from wounds suffered due to his last encounter with Bond (as described in Role of Honour), has put a price on Bond's head. "Trust no one," Bond is warned. Soon after, May and Miss Moneypenny, who had been visiting his housekeeper are reported missing, and Bond finds himself dodging would-be assassins while searching for his friends, assisted by a young débutante and her capable, yet mysterious, female bodyguard.

The price on Bond's head is a competition orchestrated by Rahani and SPECTRE known as 'The Head Hunt', and is an open contest to anyone willing to capture, kill, or present Bond to Rahani, where he would be subsequently decapitated by guillotine.