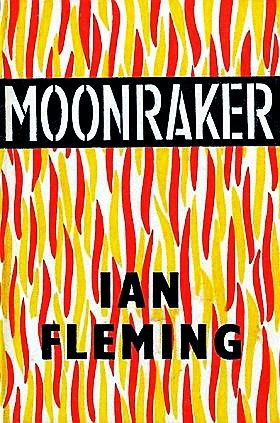 Moonraker is the third novel by British author Ian Fleming featuring the fictional British Secret Service agent Commander James Bond. The book was first published by Jonathan Cape on 5 April 1955, bearing a cover based on Fleming's own concept. Set completely in England, the story has two halves: the first concerns a battle over a game of bridge in London's clubland between Bond and industrialist Sir Hugo Drax, while the second follows Bond's mission to stop Drax from destroying London with a nuclear weapon. The book played on a number of fears of the 1950s, including the V-2 rocket, the re-emergence of Nazism, the menace of Soviet communism and the 'threat from within'.

There have been a number of adaptations of Moonraker, including a broadcast on South African radio in 1956 starring Bob Holness and a comic strip that appeared in the Daily Express in 1958. The novel's name was also used in 1979 for the eleventh official film in the Eon Productions Bond franchise and the fourth to star Roger Moore as James Bond. However, the story for the film was significantly changed from the novel so as to include excursions into space.