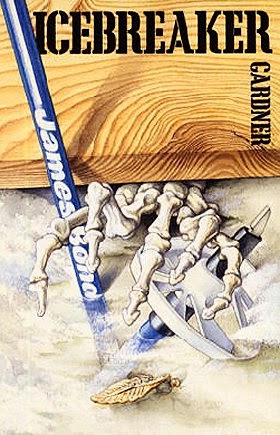 Icebreaker, first published in 1983, was the third novel by John Gardner featuring Ian Fleming's secret agent, James Bond.
Bond reluctantly finds himself recruited into a dangerous mission involving an equally dangerous and treacherous alliance of agents from the United States (CIA), the Soviet Union (KGB) and Israel (Mossad). The team, dubbed "Icebreaker", waste no time double-crossing each other. Ostensibly their job is to root out the leader of the murderous National Socialist Action Army (NSAA), Count Konrad von Glöda. The Count used to be known as Arne Tudeer, a one-time Nazi SS officer who now perceives himself as the new Adolf Hitler. The National Socialist Action Army is essentially a new wave of fascism as a means to wipe out communist leaders and supporters around the world.

The novel is full of double-crosses and even triple-crosses where the agents and agencies go without sharing their true loyalties with one another.

One of the locations: Helsinki, Finland, the homeland of 007 Travelers.