007 Travelers back in business. Destination this time was Madrid in Spain.


James Bond's (Roger Moore) boss M is on leave and Bill Tanner (James Villiers) is in charge (in real life Bernard Lee, who had played M in all previous Bond films passed away on 16 January 1981 when film's production was already on its way and producers wanted to honour Lee and decided not to recast him with another actor). Tanner and defense minister Frederick Gray (Geoffrey Keen) ordered Bond to go to Madrid in "For Your Eyes Only" (1981) when killer Hector Gonzales (Stefan Kalipha) was spotted a villa near Madrid. Gonzales killed the parents of Bond girl Melina Havelock (Carole Bouquet) and Bond is sent to investigate who hired Gonzales. This investigation is called "Operation Undertow"

Madrid is the capital city of the Kingdom of Spain and the largest municipality in both the Community of Madrid and Spain as a whole. The city has a population of almost 3.2 million with a metropolitan area population of approximately 6.5 million. It is the third-largest city in the European Union (EU) after London and Berlin, and its metropolitan area is the third-largest in the EU after those of London and Paris. The municipality itself covers an area of 604.3 km2 (233.3 sq mi). (Wikipedia)

We arrived in Madrid quite late in the evening (20.30 local time) and temperature was still + 36 degrees of Celcius. From the airport we took a taxi and it cost was 30 euros. The taxi ride to Hotel Santo Domingo took about 30 minutes. 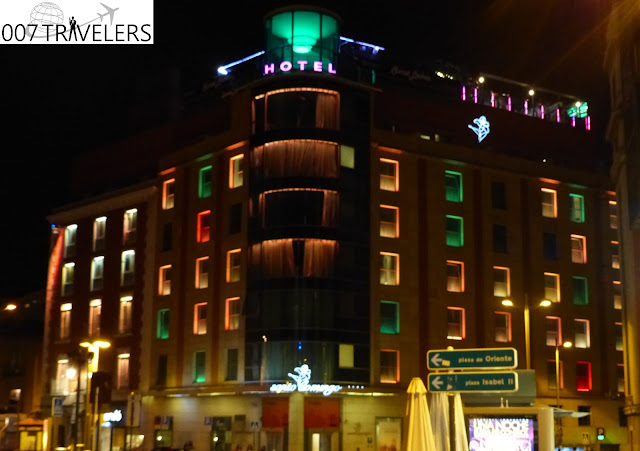 We introduced ourselves at the reception, got an upgraded room and threw our luggage to the room before going outside to have a dinner. We walked to the street nearby and had pizzas and red wine and went back to our hotel and its pool restaurant Sunset Lookers, which is located in the rooftop of the building. 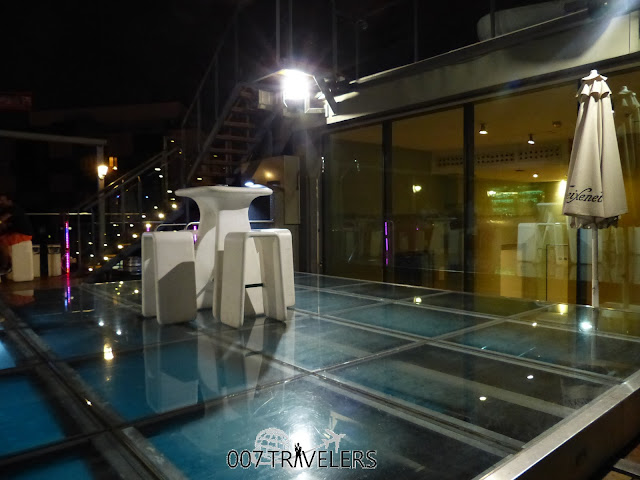 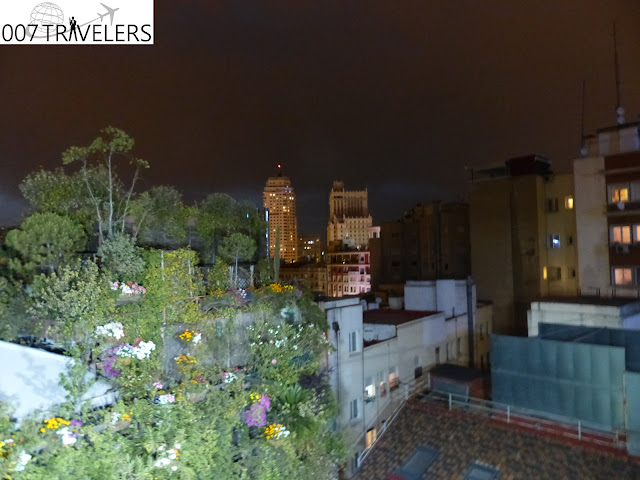 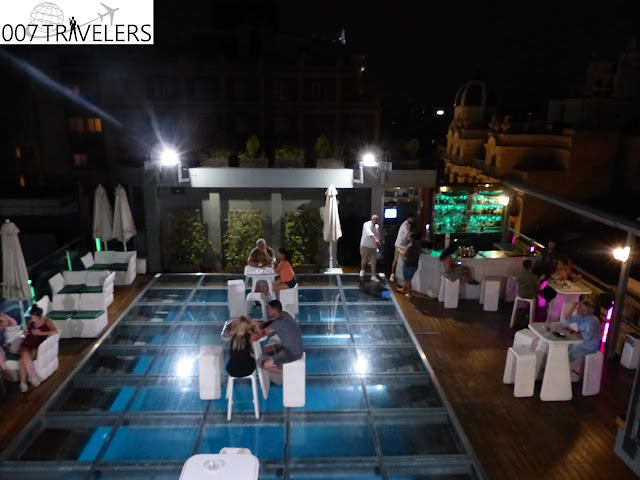 Sunset Lookers is a cocktail bar, but we ordered traditional vodka martinis. They didn't have all necessary ingredients (or martini glasses), but they did their best and we got our drinks.The view from the balcony was amazing and it was nice to watch the skyline over the city of Madrid.


Thanks to Hotel Santo Domingo's Public Relations department and Teresa Amigo, who gave us a private tour at the hotel and we were able to take some nice pics inside the hotel.

Since our arrival was late in the evening and we didn't have time to start to walk around the city yet, this first day travel story is about our hotel, Hotel Santo Domingo. Here are some facts about this nice environmentally friendly hotel (Thank you for the text Teresa Amigo):

The Hotel Santo Domingo started to operate as a hotel in 1994.

The extension with the construction of the annex building took place in 2010, and the project completed in 2012.

The Santo Domingo Hotel, located less than 100 meters away from the Gran Vía in the very
heart of Madrid, is surrounded by popular tourist attractions: the biggest commercial area in
Madrid and the most important and emblematic sites in the city, like the Prado Museum and
Retiro Park, both just 10 minutes away by metro.

The hotel has 200 individually decorated rooms, each with free wireless connection, television, air-conditioning, safe and en-suite bathroom, in a variety of styles, such as vintage, themed or smart, as well as corner rooms or suites, that allows customers to choose the option that best suits their personal tastes and budget.

Hotel offers more than 1,200m2 of naturally-lit space, distributed in 13 multi-
purpose function rooms, available for meetings, conventions, weddings and other similar
events. The Belvedere lounge has an area of 236 m2, which can be separated by movable panels and it is divided into two rooms, to suit different needs of space. This salon, along with the Natura Salon, is one of the most wide space of the hotel and it is used for e.g. wedding events. You can see the Royal Palace from the Natura Salon.

Gastronomy is a major reference point and another star attraction of the Santo Domingo. In
addition to the Sandó restaurant, the hotel provides an alternative way to enjoy the best
haute cuisine: Sando’s Bar (La Barra de Sandó) and its delicious pintxos. Both establishments offer a high quality gastronomic alternatives for all kind of customers and budgets without the need to leave the hotel. 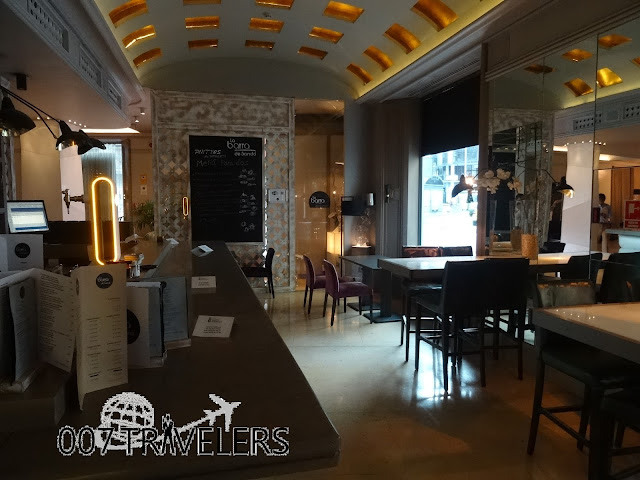 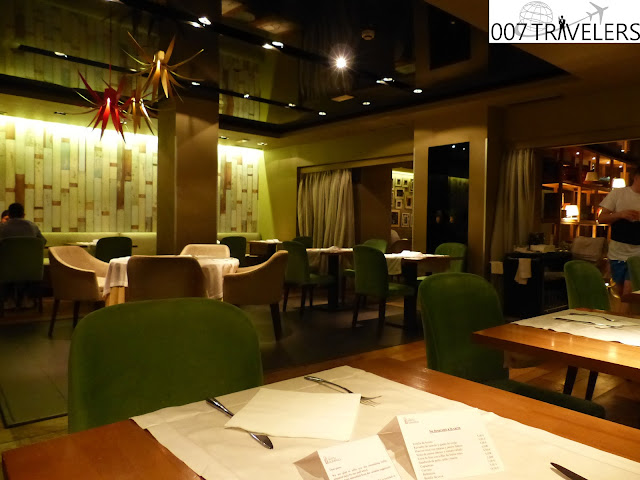 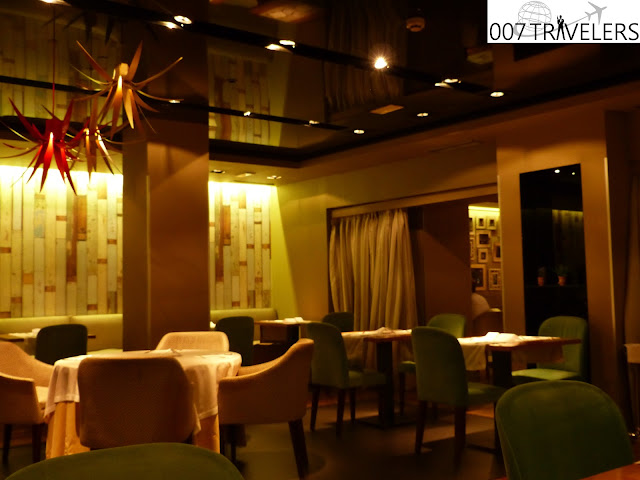 Hotel's majestic 1,000m2 hanging garden, Las Cuevas de Sandó cocktail bar –situated underneath the hotel, in authentic 16th century caves -,the amazing rooftop summer swimming-pool, with fabulous views over Madrid, and its original car park –located within the hotel, each floor decorated with a strikingly original mural painting- complete the charms of a hotel which is, without a doubt, distinctive with attractions.

The caves were part of the buildings that at that time, XVI century, the Inquisition, had in
Madrid. Here it had its offices and its prisons, until 1820. The condemned ones were later led to the Plaza Mayor where the penalty was executed: they were burned alive.

As this space has a strong historical weight and when the building was acquired, it was decided to carry out the necessary work of conditioning, so that the public could enjoy this unique place. Hotel has a passage like many other old buildings of this zone, that leads from hotel's basement to Royal Palace. 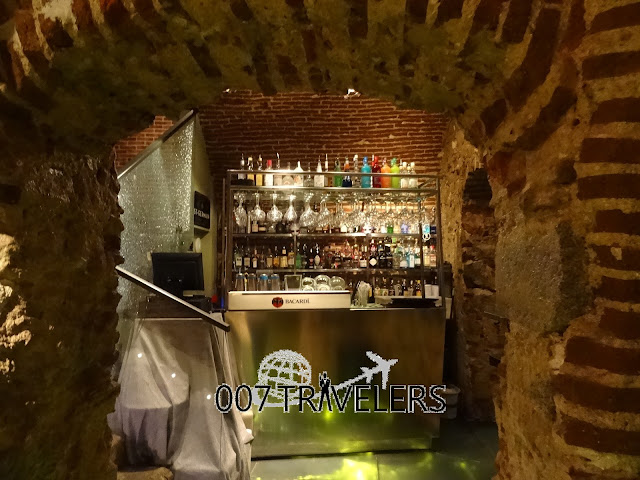 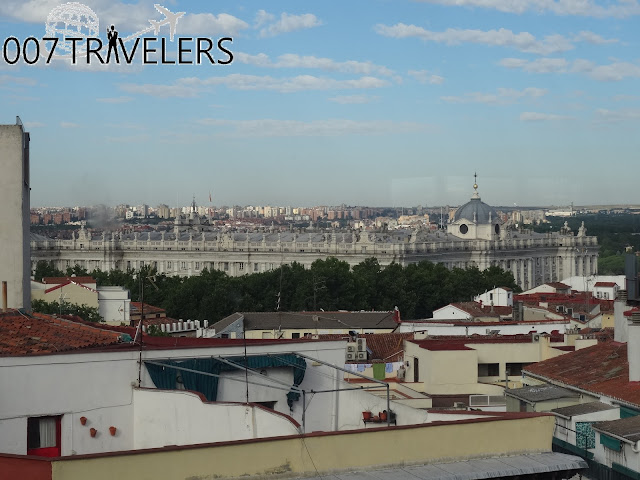 Hotel's hanging garden is a spectacular green lung of 1,026m2, with more than 260 plant species and a magnificent waterfall of 20 meters in height. It obtained the Guinness Record of the world's largest vertical garden in 2011.

It is a living project and in constant change, and that can count on seasonal flora to create a
different garden in each season.

It is a sustainable project that brings environmental benefits of great relevance. It absorbs
25,000 kg of carbon dioxide per year and generates the amount of oxygen consumed by about 200 people per day. Therefore, it reduces environmental pollution and even acoustics. The system of drip irrigation, fully automated, can achieve the maximum use with the minimum expenditure of water. Thus, moisture and nutrients remain constant.

The water comes from the gray water tank where water from the hotel's 50-room showers and sinks, after a process of decantation, purification and chlorination, is reused to feed the toilets of all rooms and the waterfall.

The hotel is very involved in trying to contribute to the environmental balance. 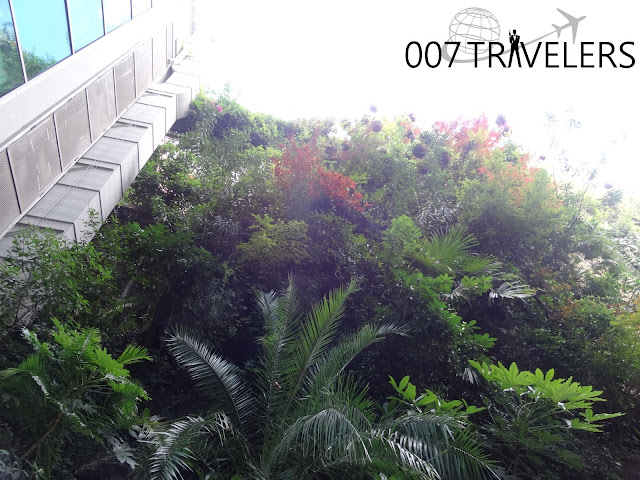 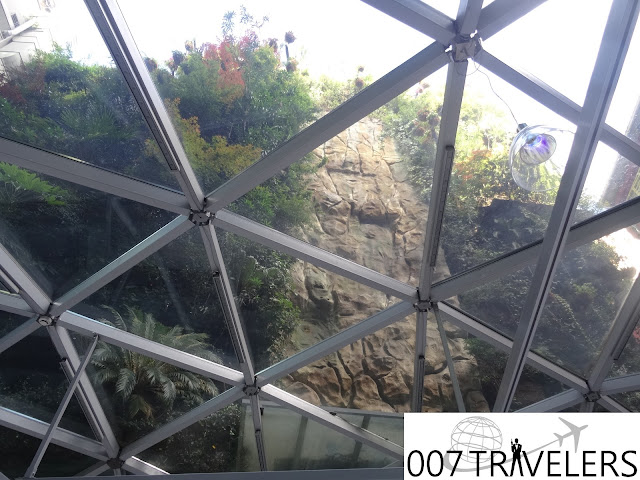 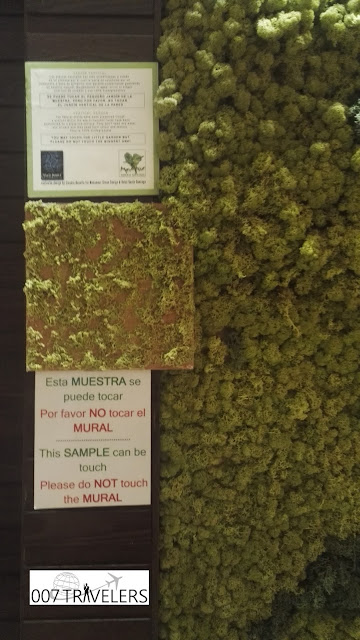 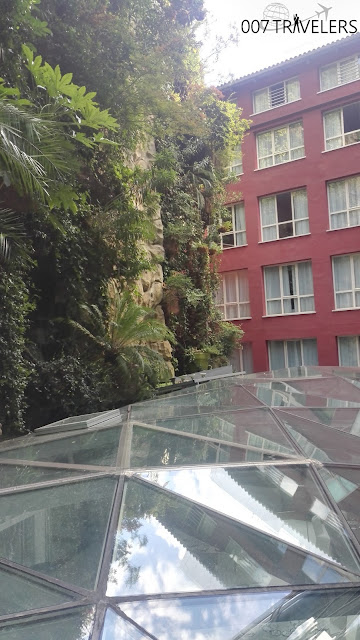 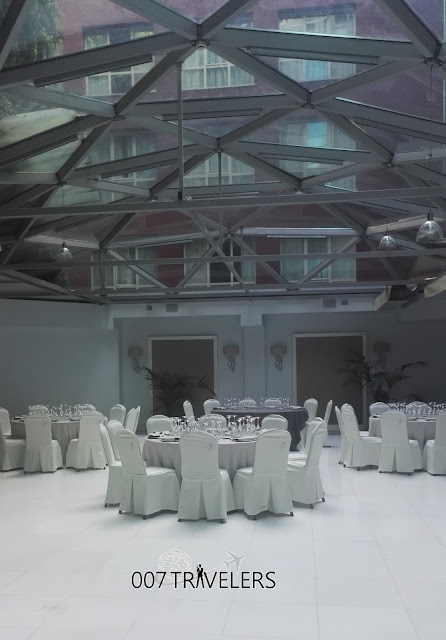 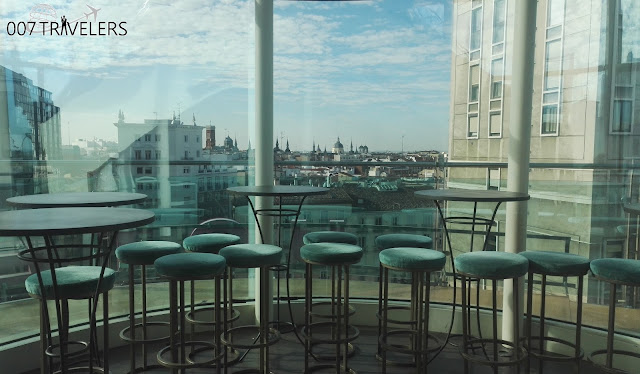 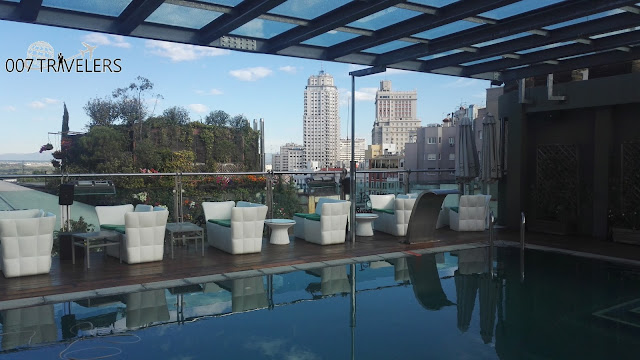 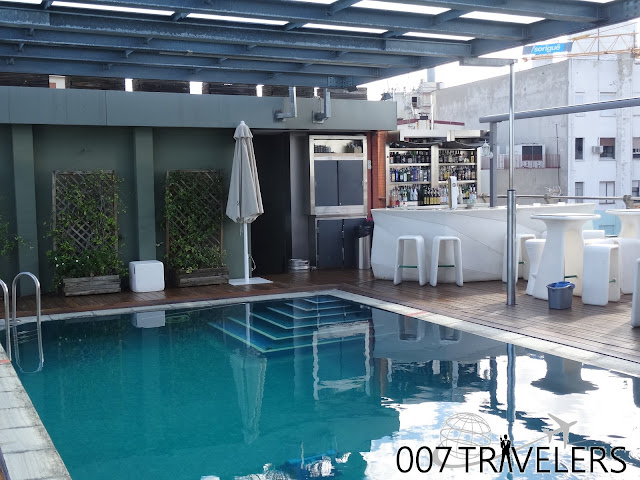 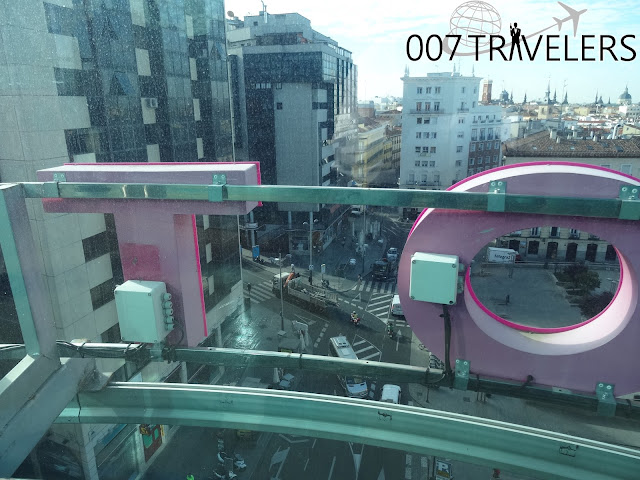 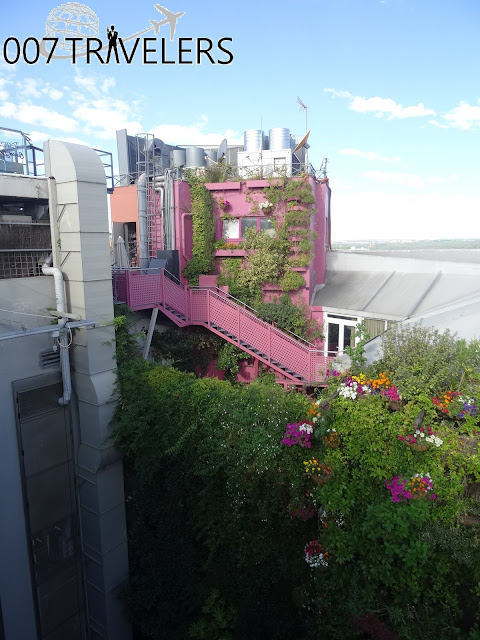 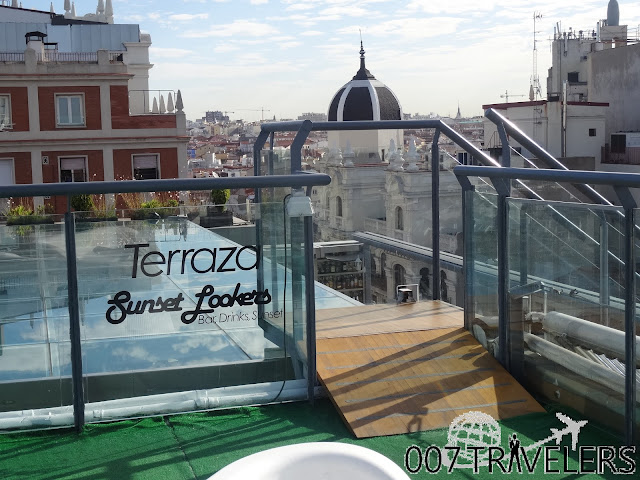 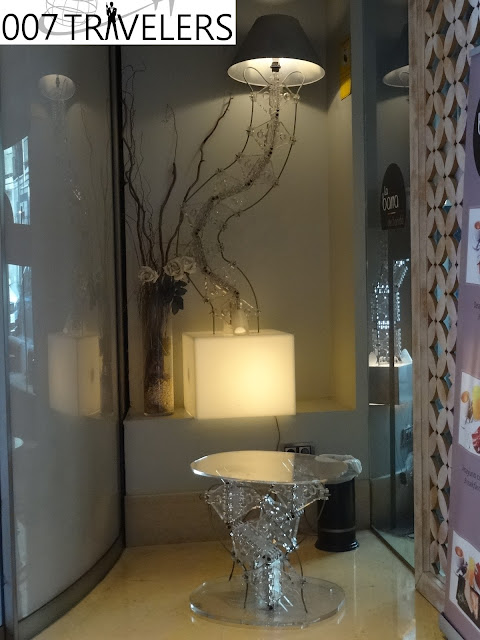 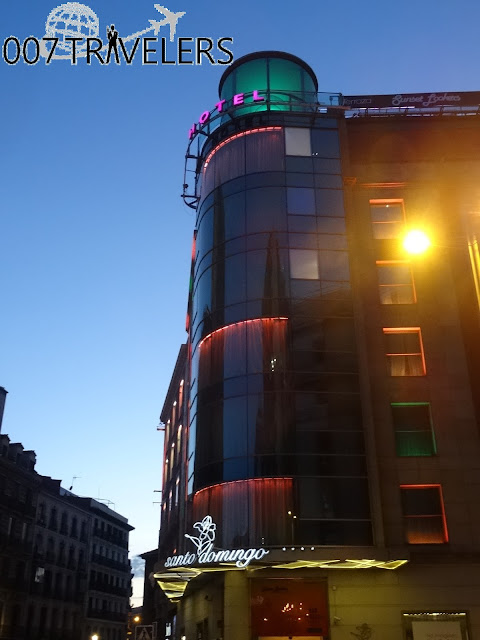 Our room was quite nice and we had a good view to square in front of our hotel.


Here are some pics of our room: 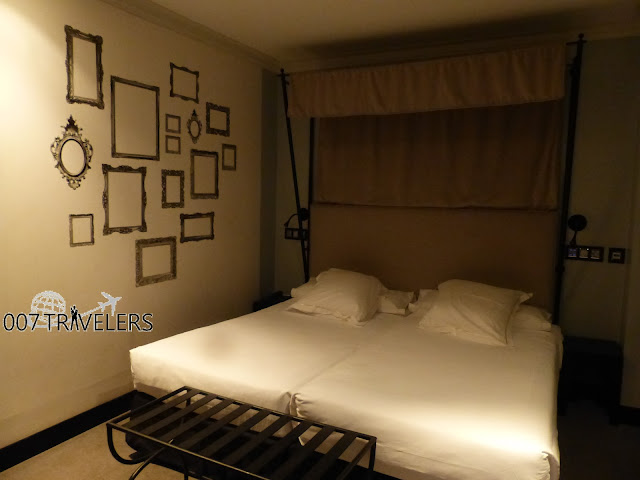 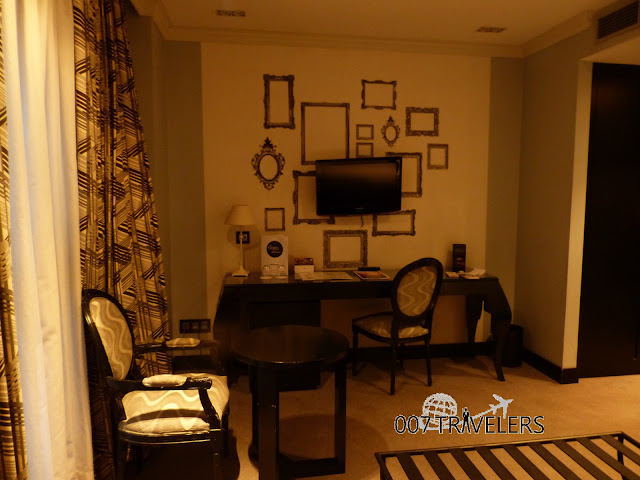 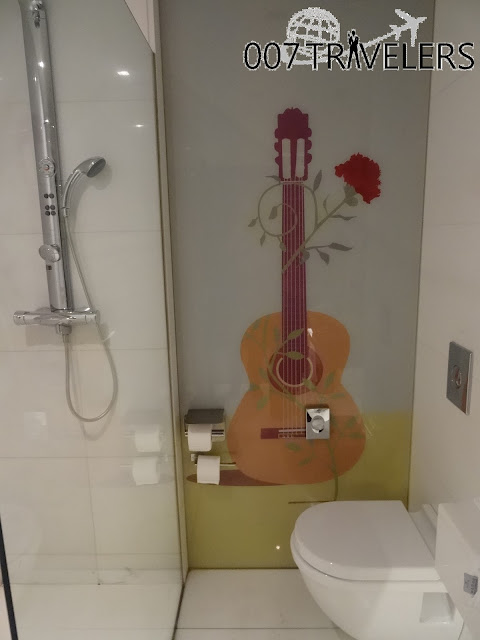 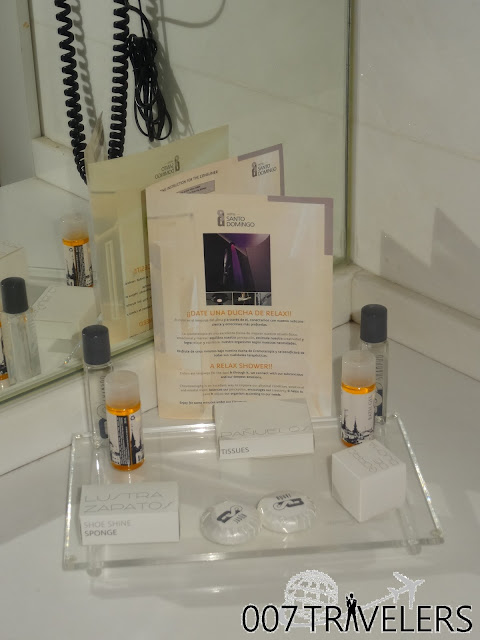 An illuminated shower was a nice surprise. 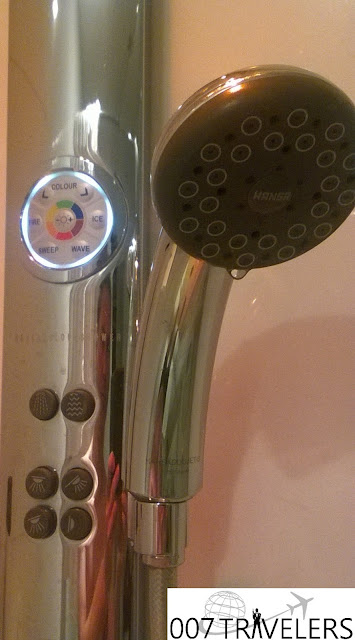 The instructions how to use the shower: 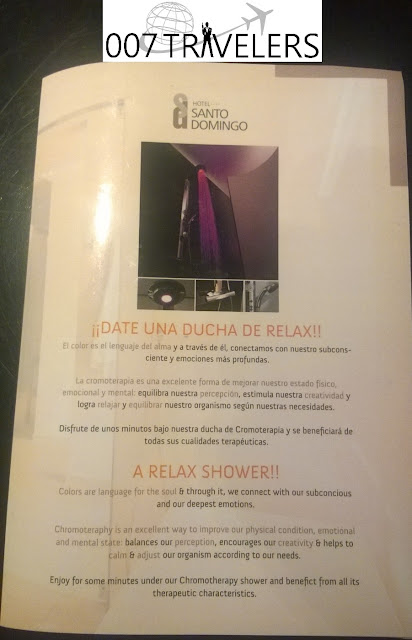 Stay tuned for the next day, when we investigated some places where Bond actors have visited in Madrid.