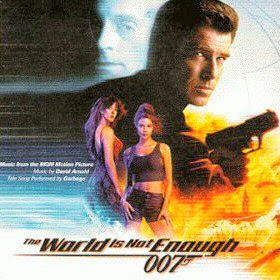 The World Is Not Enough is the 1999 soundtrack of the 19th James Bond film of the same name and the second Bond soundtrack composed by David Arnold. The score features more instances of electronic music, which Arnold included to "make the thing a little more contemporary". To add an ethnic flavor to tracks that conveyed the film's Turkey and Central Asia setting, Arnold brought in percussionist Pete Lockett, qanun player Abdullah Chhadeh, and singer Natacha Atlas.

Arnold broke tradition by not ending the film with a new song or a reprise of the opening theme. Originally, Arnold intended to use the song Only Myself to Blame, written by David Arnold & Don Black and sung by Scott Walker and inspired by the failed romance between Bond and Elektra King, who turns out to be a villain. However, director Michael Apted "felt it was too much of a downer for the end of the movie" and Arnold replaced it with a techno remix of the James Bond Theme. Only Myself to Blame, is the nineteenth and final track on the album.

* Track 20 is only included in the Japanese album release.