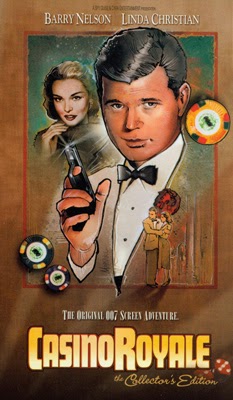 Casino Royale is a 1954 television adaptation of the novel of the same name by Ian Fleming. An episode of the dramatic anthology series Climax!, the show is the first screen adaptation of a James Bond novel and stars Barry Nelson and Peter Lorre. Though this marks the first onscreen appearance of the character of James Bond, Nelson's character is played as an American agent with "Combined Intelligence" and is referred to as "Jimmy" by several characters.

Most of the largely forgotten show was located in the 1980s by film historian Jim Schoenberger, with the ending (including credits) found afterward. The rights to the program were acquired by MGM at the same time as the rights for the 1967 film version of Casino Royale, clearing the legal pathway and enabling it to make the 2006 film of the same name.