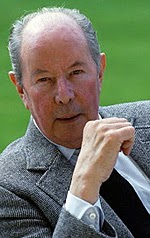 James Bond: 1962-63, 1965
Young had previously worked five years earlier with the then relatively unknown Sean Connery, who was to play Bond, on "Action of the Tiger". For the first Bond film, Lois Maxwell claimed that "Terence took Sean under his wing. He took him to dinner, showed him how to walk, how to talk, even how to eat." It led to three of the first four Bond films: "Dr. No", "From Russia with Love", and "Thunderball". They became financially and critically successful and helped Sean Connery become a superstar during the 1960s.
During the filming of "From Russia with Love", Young and a photographer nearly drowned when their helicopter crashed into the sea while filming a key sequence. They were rescued by other members of the film crew. Young was back behind the camera thirty minutes after being rescued.

Email ThisBlogThis!Share to TwitterShare to FacebookShare to Pinterest
Labels: Director, Dr. No, From Russia with Love, Terence Young, Thunderball