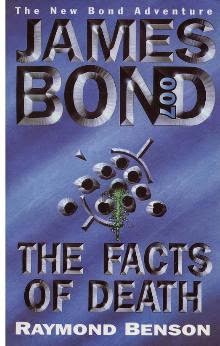 The Facts of Death, first published in 1998, was the third novel by Raymond Benson featuring Ian Fleming's secret agent, James Bond (including Benson's novelization of Tomorrow Never Dies). Carrying the Glidrose Publications copyright—the final James Bond novel to do so—it was first published in the United Kingdom by Hodder & Stoughton and in the United States by Putnam.


The novel's title was originally The World Is Not Enough, an English translation of the Latin phrase Orbis non sufficit, which appears in the novel and film On Her Majesty's Secret Service. The title was later used for the nineteenth James Bond film, released in 1999.
The Facts of Death starts off with several deaths from mysterious diseases. We first find Bond in Cyprus where a number of British troops have been discovered murdered, under mysterious circumstances. Bond gets too close for comfort for the group behind the actions and is attacked, but rescued by a fiery Greek female agent, Niki Mirakos. Bond then returns to Britain. He is invited to attend a dinner party being held by his former boss, Sir Miles Messervy. His current boss and her boyfriend are in attendance.

Email ThisBlogThis!Share to TwitterShare to FacebookShare to Pinterest
Labels: Raymond Benson, The Facts of Death