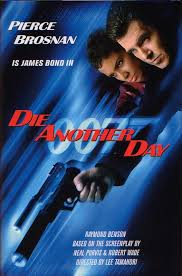 The novelisation to Die Another Day was written by the then current official James Bond writer, Raymond Benson based on the screenplay by Neal Purvis and Robert Wade. Like the movie, the novel also featured many references to past Bond movies and novels.

A few months after its publication, it was announced that Benson was retiring as the official James Bond novelist, and Ian Fleming Publications (owners of the Bond literary franchise) announced that the series was going on hiatus. A new series of Bond novels by Charlie Higson was launched in 2005, although these books focus on Bond's adventures as a teenager (Young Bond).

As a result, Die Another Day, the novel, is for the time being the final literary adventure featuring Bond as originally conceived by Ian Fleming, although the publisher released another "adult Bond" novel to coincide with the 100th anniversary of Fleming's birth in 2008, Devil May Care.