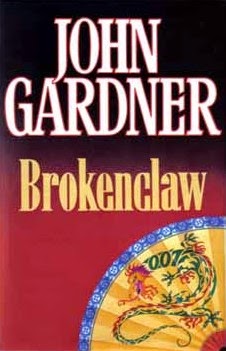 Brokenclaw was the tenth novel by John Gardner featuring Ian Fleming's secret agent, James Bond. Instead of picking up where the novelisation Licence to Kill left off, Brokenclaw completely ignores the story's events and continues from Win, Lose or Die.

After expressing frustration over a lack of action after his year-long mission with the Royal Navy (as detailed in Win, Lose or Die), Bond threatens to resign. Instead, M orders Bond to take a vacation. Bond travels to Victoria, British Columbia where he is intrigued by Lee Fu-Chu, a half-Blackfoot, half-Chinese philanthropist who is known as "Brokenclaw" because of a deformed hand.

Later, Bond is ordered to San Francisco where he is tasked to investigate the kidnapping of several scientists who have been working on a new submarine detection system and an "antidote" known as LORDS and LORDS DAY. Bond and CIA agent Chi-Chi Sue go undercover using the codenames Peter Abelard and Héloïse that were assigned to two agents from the People's Republic of China that are sent to evaluate the submarine technology before purchasing it.