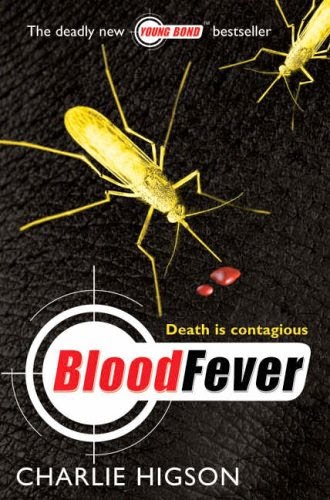 Blood Fever is the second novel in the Young Bond series depicting Ian Fleming's superspy James Bond as a teenager in the 1930s.

Blood Fever begins with a prologue during which a young girl named Amy Goodenough is aboard her father's yacht in the middle of the Mediterranean when she becomes witness to a band of pirates under the command of Zoltan the Magyar who board the yacht. Zoltan's men ransack the vessel and in the process murder Amy's father who was unwilling to part with his priceless possessions. When Amy fails to get revenge by throwing a knife at Zoltan and hitting him in the shoulder, she is taken prisoner, but swears she will one day succeed in achieving vengeance.

Following the adventure SilverFin, James Bond is back at Eton where he is now a member of a secret risk-taking club known as the Danger Society. As summer vacation looms, James is given the opportunity to go to Sardinia on a field trip with one of his professors, Peter Haight and a colleague, Cooper-ffrench. While there Bond would also be able to visit his cousin, Victor Delacroix (a relation of Monique Delacroix, James deceased mother).
Prior to leaving, Bond learns of the tragedy that took place on the Goodenough's yacht from his friend, Mark Goodenough, Amy's brother who attends Eton. Bond is also witness to a mysterious group whose followers are marked on both of their hands with an 'M' (double M), which James eventually learns is the mark of the Millenaria, a defunct secret Italian society that has had plans throughout history to restore the Roman Empire.